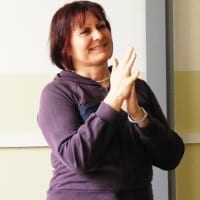 Local ministry background:
Monika used to serve as a pastor in the Evangelic Church. In the year 2010 she began to work for the CZ branch of ICEJ: The International Christian Embassy of Jerusalem.

Monika gives lectures for the elementary schools and high schools in Ceske Budejovice, where she lives, and its surroundings.
Her chosen main topics are “Anti-Semitism” and “Holocaust”. According to her, young generation needs to hear about all those terrible things which had happened. This is the only way to stop history from repeating if people learn from their mistakes.

Monika says:
“During the programs, students are led to reflect the danger of racism individually and independently so that they could learn to be sensitive to any kind of prejudice, racism, anti-Semitism, xenophobia or extremism. The sad thing is that these can be found even in the contemporary times.”

Besides these classical topics, that is very welcome especially by the teachers of the history class, she gives also lectures about the anti-Semitism during the 2nd half of the 20th century and about the modern state of Israel. The lectures are always interactive with pictures and videos.

Monika became a member of the team of HY workers in 2013.

Visit the reportages from Monika’s lectures and taste the atmosphere of this work:
March 2019
June 2017
October 2016
October 2013

How she became a lecturer:
Monika used to be a pastor and a housewife. She became an ICEJ lecturer in 2010 when she began giving the lectures at schools (elementary schools as well as high schools).

She says that her lectures are usually well accepted. The students are usually very interested in the topic. But difficult situations come from time to time as well.
”One of the students – a class leader – presented his very radical attitudes during my lecture. His ideas were as follows: If there is somebody with the best abilities, intelligence and strength. Why should not he reign and lead other people?
This student actually identified himself with the Nazi theory of the supermen. We discussed his question for a while and even some girls joined us in the discussion. Then I could come back to my topic. Neither wanted I just to ignore him nor to develop the debate that is confusing for the students. I hope it was constructive in the end. I am grateful that I did not have to face any other similar situation later.
However, more than this student’s opinions, I was surprised by the teacher. She was quiet all the time. After the program she expressed her admiration to knowledge of this student. I was not sure whether she had heard what kind of ‘knowledge’ he had proved.”

Lecture topics and resource:
According to her education and cooperation with the ICEJ organization, Monika created her own lecturing topics which fit preciously to the demands of schools in her region:
Anti-Semitism and Holocaust in Pictures and Documents
Anti-Semitism of the Second Part of The 20th Century.
The Modern State of Israel

“Students themselves required this lecture according to the reference of their older friends!”
A teacher

“Such a useful kind of the xenophobia prevention!”
A teacher

“Perfectly prepared – we can see the work that stands behind the final presentation. The narration of the strong story with an emotional accent that captures listeners! Historical pieces of information that are often neglected during the history lessons.”
A teacher

“Very profound lecture given in a very understandable way.”
A teacher