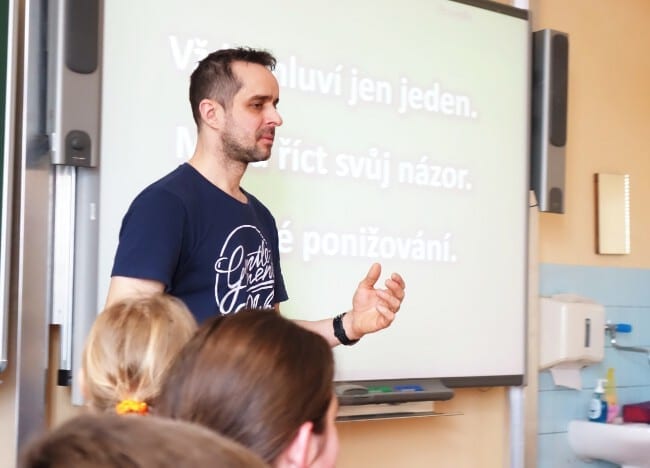 The “Relationship in class” Programme for Secondary Elementary School is designed to prevent bullying. But in my opinion, enhancing good and positive relationships within the collective give a true picture of this programme even better. The word “bullying” does not often appear in it, as I noticed in the class during my visit of Ivo Neuvirt.

Ivo is very popular at this school and well known from previous programmes. According to his experience, this class is not directly threatened by bullying; it’s really a “good bunch”.

But it is good reason for having this program in this class, to strengthen the good in the students’ lives as much as possible. People with healthy attitudes towards life can be an effective support of needy people in the future.

Ivo has usually well-prepared presentations for his programmes. This time, however, the data projector was “hanging out” because the focus of lectures was entirely on polls associated with joint debates and collective games. Both had a breathtaking atmosphere. I would almost have been involved. I advised at least to the closest group during the last game how to fulfil the best the common task… Games have led the children to cooperate, talk about solutions and respect each other. 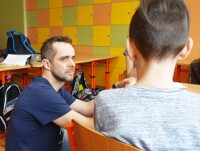 The activities in the programme have an excellent impact on classroom relationships, mainly through the leadership of the lecturer who leads children to positive responses. In the final reflection, he encourages them in what they have achieved. At the same time, it shows the need to take the less assertive members of the collective into account, praising the class for the manifestations of mutual respect and helping those less able.

The programme is full of positive energy and one can feel better after it – at least happier and in a better mood than when it started. We did not call the program of lecturing at schools as “healthy youth” in vain!