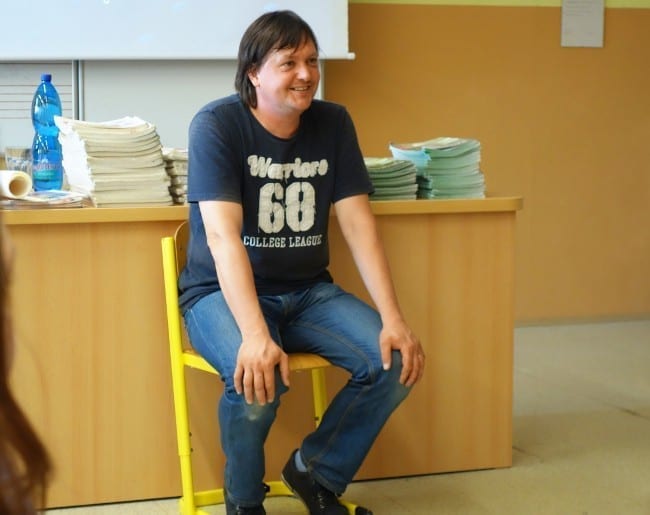 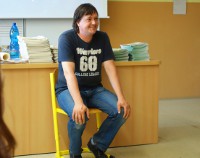 All of Martin Stavjanik’s lectures share one specific feature: he listens more than he speaks. This session on a sensitive topic that he has with 7th grade pupils is not an exception. If anyone wants to express their ideas, Martin is willing to stop speaking and listens to what the person says. The atmosphere of his lectures makes everyone relax and immerses them in the discussion.

Martin seems to be enjoying the fun he has with the children. Hardly anyone would think that this nice guy, who often wears simple t-shirts, is a university educated expert. He is currently completing another degree; he passed a lot of courses and has a 16-year experience giving lectures in schools. Other lectors respect him and call him “the old lector”.

Everyone enjoyed his lecture on the topic of sexual abuse and rape. Since the lecture was being presented in a sensitive way and the atmosphere was comfortable, everyone stopped being shy about discussing this intimate topic. During the session, the children were expressing their ideas about various risk situations; some of them were sharing their personal stories. The videos they were playing showed the current high risk: the social networks. However, Martin pointed out that statistically, the highest number of risk situations is not created by strangers but by close persons.

When leaving the lecture, the children were encouraged to be more careful. They were happy from meeting “their” Martin. During the lecture, they also had fun projecting pictures on the screen from their previous sessions. Martin became within years a true example of listening heart and accepting attitude. Kids love him and feel that this guy with his faith presents a different kingdom. 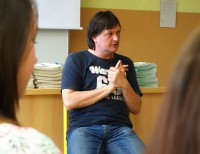