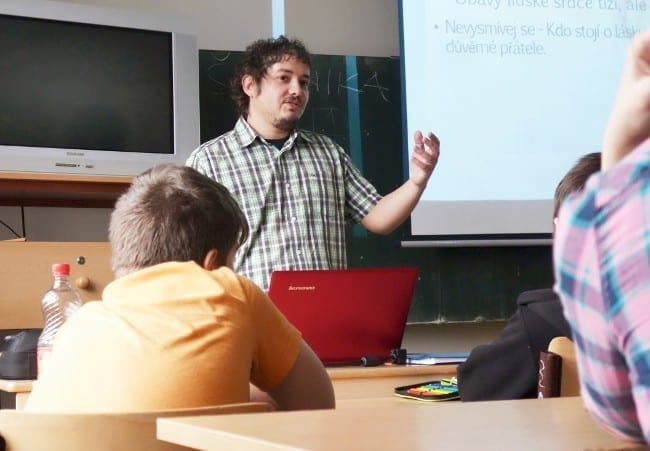 Supported by the foundation International Needs, Simon Velkoborsky has been giving lectures in the region of Klatovy since September 2015. He was also doing this work the year before, however, the foundation currently enables him to deliver more lectures now.

Having used several sources, Simon prepared a talk about relationships, which catered for 8th grade pupils. He was asking questions that the children seemed to find meaningful. Not only were they paying attention, but they were also eagerly responding to them. The talk was straightforward referring to relationships among couples and friendship. Simon was presenting his real-life examples, which obviously worked. Having attended some of his previous lectures, the children knew Simon. As their teacher told me, they also like him. Simon was telling them some of his personal stories. Before becoming a Christian, Simon was leading a disordered life. Today he is a father of four children. He was long resistant to the idea of holding the Christian belief. He even vehemently refused it twice. “Then I realized that third time’s a charm,” says Simon. The school bell rang when he was saying these words.

We had two interesting lessons when the children, divided into small groups, were discussing different subtopics. Then the groups were sharing their views on the issues. It was apparent that the children were provided with a valuable experience and a stimulus for their future relationship development and fostering values.