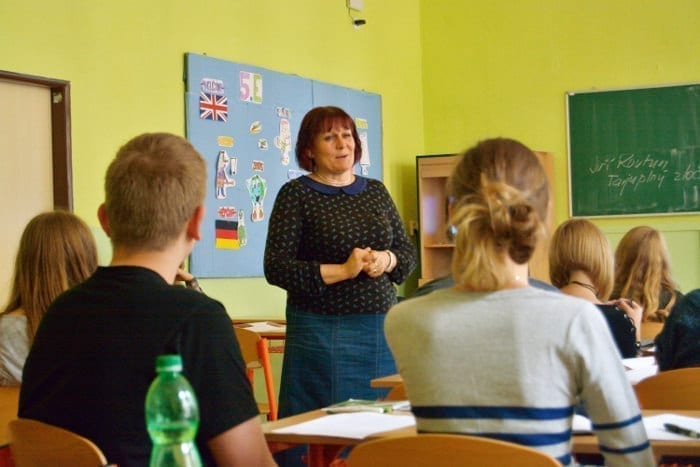 Monika Sluneckova has been working in the city of Ceske Budejovice and its surroundings already for several years. She performs the lectures with the topics like the holocaust, anti-Semitism, Israel and other similar themes.

We visited her program for the Grammar School in České Budějovice. It took place in October and it was about the period of the Czech history called the Hilsneriade. Monika had prepared for her students one hour’s edited version of the film The Crime in Polna. It is the new film adaptation of the historical events from the end of the 19th century. A young Jew Leopold Hilsner had been falsely accused to be a murderer of a young girl. Anti-Semitic feelings grew up enormously throughout the whole society. We call it „ Hilsneriade “ today. One hour’s edited version of the film shows everything that is important: how it came that Hilsner had been accused, who favored whom, who was in danger when defending Hilsner or standing up against general hatred and actually what were the proofs in this case and how did it come out.

This film version shows very well not only the problem of anti-Semitism but extremism of any kind in society. There comes of course an evident parallel with the today’s society and the matters that we can observe among people quite commonly today.

Students watched the film very carefully and did not mind even missing the break. Monika discussed the main questions of the film with them. Students thought about the motives of particular people and also about the consequences of various attitudes. They could realize that standing for truth against the majority can be difficult and dangerous while adopting the lies and undertaking the populist and only superficially appealing steps can bring fame and quick success eg. in the politics. Everybody has to decide it for himself which approach from the two above mentioned is more right. The first Czech president Tomas Garrigue Masaryk can be an important example for us in this case how tough defending the truth can be. In those times he was only the university professor. The film shows his role very well.

This is a very strong topic and I hope students discussed it even after the program.