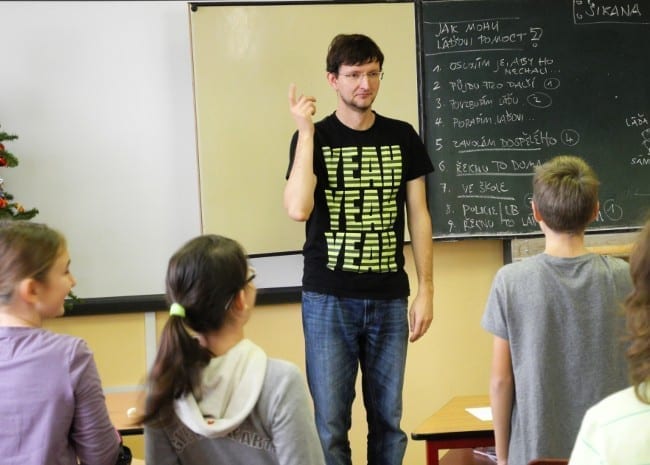 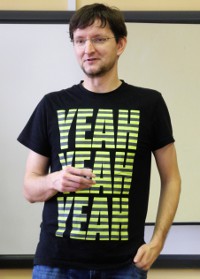 Miloslav Fanta really enjoyed his lecture on bullying that he gave to 6 grade pupils in a rural school near Mlada Boleslav. He has been cooperating with this school for many years now and its principal highly acclaims his work (I have heard the acclaim many times…).
“Whenever I tell the children Mr. Fanta is coming, they are very cheerful.”

The lecture provides the children with the basic information and other views on bullying. It also helps them to differentiate between innocent teasing and real bullying. However, the information is not the only thing the lecture provides. At the beginning of the class Mr. Fanta lets everyone introduce themselves in a funny way. Then he starts effective communication with the children. First he confuses some names, which is another funny thing, but in the second part of the class he knows all the names perfectly well. Humor and a slight exaggeration are his common working tools. Mr. Fanta is well-known for his great drawing skills – he often chalks pictures on the blackboard very briskly when giving a lecture. Besides that, he provides vivid examples or plays short scenes to highlight every important piece of information. During the scenes he demonstrates his genuine acting talent and sensitive cooperation with the children.
Some pictures show what his extraordinary performance looks like.

The classes are interactive. The children express their views and provide suggestions on how to deal with crisis situations. I can only recommend Miloslav Fanta. If you want to hear an excellent lecture on bullying, do not hesitate to invite him to your school. The children gain valuable experience and learn how to avoid the dangerous social problem – bullying.