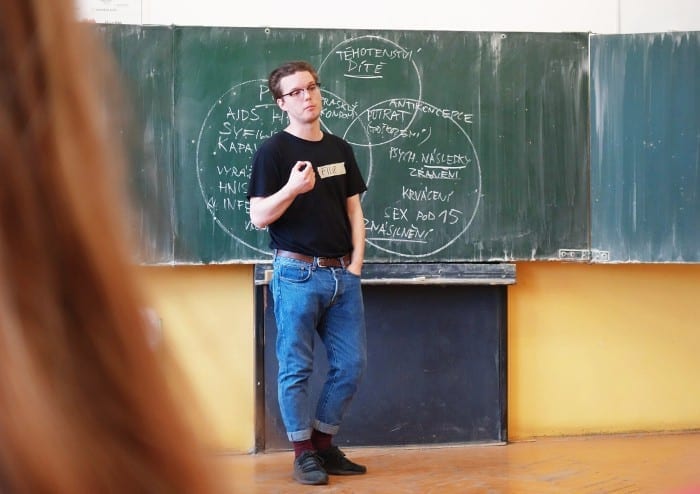 Hazardous sexual behaviour
Filip is one of the lecturers we started to support at January 2018, but he had been learning the skills since the previous autumn. Though he was at the beginning of a promising artistic career, the call to work with young people became predominant. He works at schools in Hrádek nad Nisou and its surroundings. The programs at schools are followed by various leasure-time clubs and activities for young people where the lecturers can have closer and more long-term contact with the kids.

We visited the ninth grade of one of the bigger schools in the region, and with a bit of worry we anticipated quite wilder environment. The class does not have a good reputation; and we were to spend three hours at an interactive workshop on a sensitive topic for young people in sensitive age (15 years old). Moreover, half of the workshop consists of group work and games.
Yet right from the beginning Filip got on the same wave with the kids in communication and in collaboration. During the program the students themselves express their opinions on some important situations and challenges in the lives of young people. This style of communication has a kind of healing effect for in this way the things get under their skin. The programs openly points out some of the most common examples of hazardous behaviour the can eventually lead to rape. Filip also speaks about other possible consequences of unsafe sex: abortions, sterility or health risks. 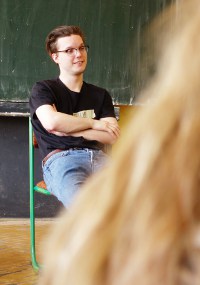 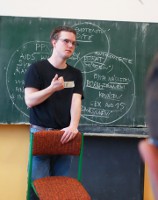 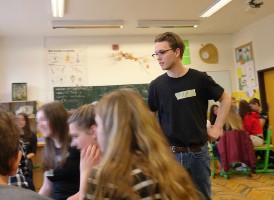 In the last hour a thrilling activity takes place: Filip starts to tell a fictitious story of a 14-yeras old girl Trudy (a very rare name has been picked up here to avoid the chance of a girl with the same name being present). In front of the kids’ eyes a story is being paint about growing up and encountering the first breaking moments in the area of sexuality. At each of the life crossings the kids are to say: which of the two decisions is good for Trudy now? Then someone from the class throws a special dice that shows Yes or No – and moves the hero’s life forward in one of the two directions. In some other moments of the story, when Trudy makes a decision and for example makes an unfortunate step towards a premature sex experience, it is the dice again to decide if she has to face the negative consequences or not. During throwing the dice the class often holds their breath: does Trudy get an infectious disease or not? What is her next life going to look like? Are there any consequences to the health of the baby?

All the communication and activities are tenderly coordinated by Filip. The kids almost tangibly feel the risks of wrong decisions in this very important part of human lives.