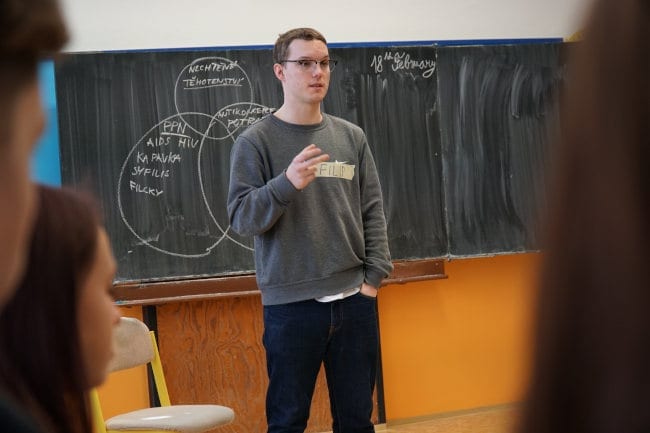 The program in ninth grade of one elementary school called “Risky sexual behaviour” is purposefully interactive: the adolescents adopt positive values rather under the influence of experience and of “aha/ I see” enjoyments, than of direct advices. They need to come to the hang of things by themselves.
Accordingly is guided the entire program, creating room for students to get involved.
However, this time we got into a difficult situation. Discussion in class and its response seemed to get frozen. It appears as if at least two groups are forming in the team, without any deeper communication between them.
The program first touches on the general risks of sexual behaviour, rating the scale of their incidence plus the real possibilities to protect themselves from the endangering – including the myths associated with this. In the last third of the program the class gets involved in the fictional story of a girl who comes to a high school and experiences her first love, including risky situations in terms of sexual life. Withal the pupils, under the leadership of the lecturer, speaks about every other of life crossroads of this girl: is it good, if she does this, or is it wrong? Then the pupils vote on which of her life steps they consider good.

Philip did not give up and patiently finished the program and the fictional story that in this case ended with pregnancy after rape. Perhaps in this class, there were sitting the people who needed to hear this and be conscious of how far the things can reach in life. They all spontaneously agreed with at least one fact at the end: yes, this could be a real story of one of us. The program was challenging for the lecturer, but perhaps those who need it most, have just heard it.
At the end, we talked with the lecturer about today’s program with hope, though also with a bit of sadness. A great deal of pupils in the voting regarding some fictitious situations leaned over to the views, from which “our hair was terrified; they seemed to approve really nasty things … But we realized that it was quite possible that it could be just their pose.
May God protect them and in their realistic life situations they will recall what they heard and experienced in this program!