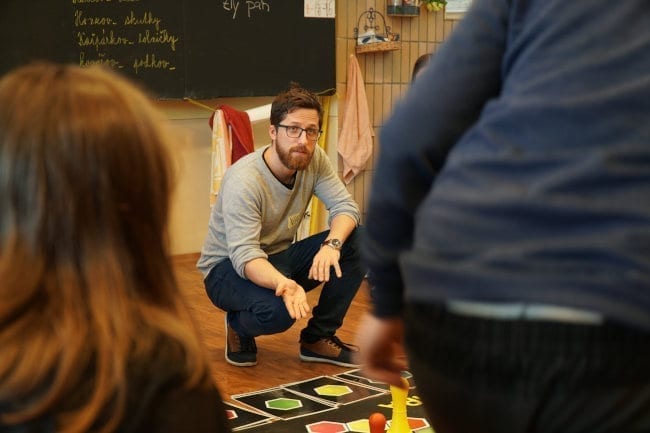 Vaclav Jiricek, joined the lectureship work about a year ago, and joined to the Healthy Youth team since September 2018. Now we had the opportunity to be with him for the first time in a live the program, in the fifth grade class and with Vaclav’s favourite theme “Cyberspace”.
Also this program adheres to principles that have worked so well in the work of some other local tutors: there are no projected presentations. The programs are fully based on interactive discussions, working in small groups and on games using simple tools. Is it really possible to run also a program about cyberspace effectively? Yes, and thanks to my visit I have to say that the effect of this method has made a deep impression on me. After all, children know the world of computers more than well… and to talk about it in this way, it certainly leaves a strong imprint in their hearts.
Vaclav as a man seems to be uncommunicative and taciturn personality. As has been the case many times, I also found out that this it does not have to be an obstacle for lecturing!
Among the children he performs in a kind, hearty way, and from the very first moment the children feel great with him. They cannot be fooled even by the occasional Vaclav’s apparent rigor, the three hours of the program pass in a cheerful and sober atmosphere like water.
First of all, the class will clarify the basic concepts and facts about the internet world and the safety on it. For example, children try to find the right rules for how to write on the internet with an unknown person. However, after a joint discussion, it is increasingly seen that no answer is entirely adequate. “Well,” explains Vaclav, “do you know what the basic three rules for communicating with an unknown person are on the Internet? This one: NEVER! NEVER! NEVER! … Do not write to an unknown person on the internet! ” The children accept a spoken rule with a grateful laugh.

“And if you want to put photos or news on the Internet – if you don’t mind to put them on a billboard in the square, well, you can put them there. But if it should mind you, don’t put them on the internet…! ”
The children certainly will remember the simple rules. Like much more what they learn in the last third of the program. Here the children play a thrilling collective game. Each team in this game will advance a little further in the game only if it answers correctly to a question about Internet safety. It’s extremely exciting: the kids are cheering each other and watching all the more carefully as the correct answer sounds!
All of them want the whole class to succeed because they are looking forward to a happy conclusion. If the class succeeds, they win the “secret”, it means the joke that Vaclav promised to answer them.
It is a fascinating conclusion: the class finally gained /won the joke. But even here, Vaclav teased them a bit before telling them a joke!
In the end, Vaclav invites children to clubs that the local church runs in the city and which are frequently visited. We believe that many will find the way to these clubs, because three hours spent with Vaclav is certainly a great motivation for them.