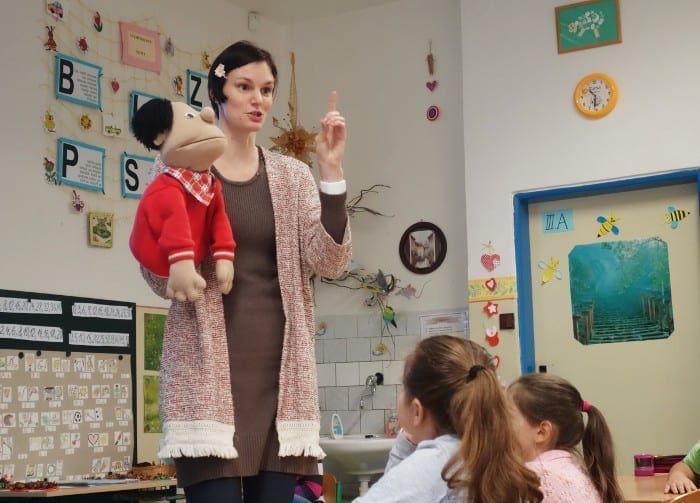 How to get along with the siblings? ‘My mom stared at me and my brother for quite a time. Then she turned around without saying a word and she walked away,’ relates Ida to a class of fourth-graders during a discussion session on relations between siblings. My brother and I were completely shocked. We went to our rooms and we just sat there in silence. A while later, mom returned and she brought two bars of chocolate and she gave one to each of us. ‘This is for you, because THIS ONE TIME you finally did not argue and you helped each other!’ Before describing this situation, Ida had explained how she once helped her brother with cleaning the stairs, which he had been ordered to do as a form of punishment. She felt sorry for him and instead of the usual teasing one another, she grabbed a mop and she got down to do the chore with him.

Tiny real-life stories like this spice up the programs of Ida Pencova and make them even more vivid – and her programs are never boring! Open and enthusiastic discussion is a typical characteristic of her work, which is focused primarily on pupils on lower elementary schools. Children love talking with her! For them, Ida, is ‘the lady with whom we can talk about anything,’ as one of her pupils remarked. 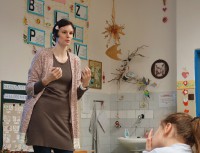 Discussion about siblings’ relations is a hot topic for the pupils. Nearly all of them know it from their own lives and that’s why they enjoy getting involved in work groups which discuss some specific situation in life and the group’s speaker then presents to others the ideas and proposals that they have come up with. Children enrich one another during the programs and they are being motivated to treat one another positively and with mutual understanding.

An indispensable companion to Ida’s work is her puppet called Ludvik, which she uses to illustrate her lectures and bring them even more to life. Ludvik indeed gained a kind of a celebrity status among the children! Ida recalls that during one of her visits to a school, children from higher classes met her in the hallway. They greeted her and a few moments later they turned to her with shouts like: ‘This is the lady! The lady, well, the one with Ludvik!’

Ida’s every visit to schools in the area of Varnsdorf and Sluknov where she has been working for 4 years is thus warmly welcomed and it leaves a palpable trace in the children’s hearts. Many young people join weekend events or club activities which are frequently held in the local church. 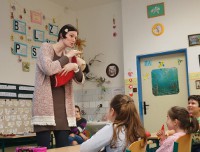