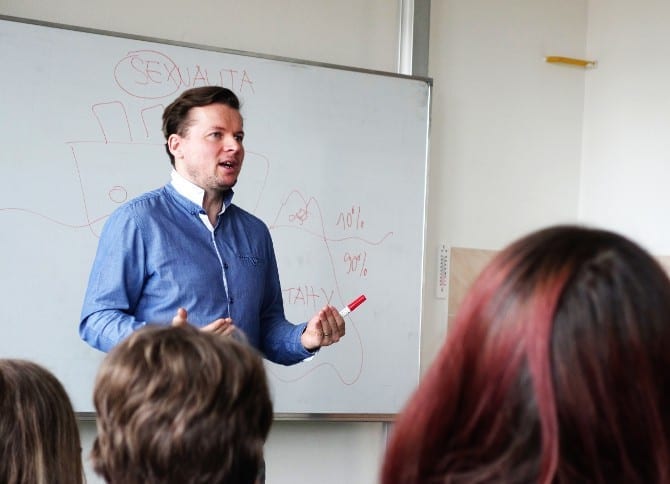 Jaromir Babka got his professional experience from lecturers Patrik Muller and Roman Kladivo from Liberec. They were or are our most experienced workers. Later Jaromir moved to Sobotka being led there by God and after a few years of break he began to work in our team of Healthy Youth Program. He started in September 2016 in Mladá Boleslav region.
A lecture „Sexuality“ is a stunning experience for 8th grade students. Jaromír can communicate with children very nicely and kindly. His message is very clear and leads uniquely to the responsible way of life. The picture of legendary Titanic destroyed by an iceberg dominates to the lecture. „And an iceberg, dear friends, has 90 percent of his mass under the water. Sexuality in the same way is not what we see in pictures and what attracts our attention and what presses on us nearly at our every turn. That is only 10 percent of the true reality.“

Then they together with the class look for what creates the crucial part of all what we call sexuality. Nobody wants his Titanic to wreck. „And dear friends, I must tell you I have seen a lot of boys and girls whom it literally wrecked.” Then conversation turns to love, relationship and real friendship. Jaromir introduces them to model life stories of his five friends whom he has known for many years. Children can realise real values of the life on these real life stories and they discuss them for a long time.
Jaromir communicates with children openly and with harking heart. How important is to talk with young people about the delicate aspects of the life! The lecturer is becoming a trustworthy person, „an old brother“ who you can speak openly with.

Lecturer’s stories from his life creates specific atmosphere in the lecture: „We had a two year older schoolmate in our 9th grade class. We all boys lapped his every word up while he was describing his adventures with girls. We felt like abnormal that we don’t do the same.“ Later he with some other boys made understood that they all found themselves in the same feeling… they all seem to be abnormal. However they took courage at farewell party to ask one of his „spicy stories heroine“. It took some time before they blundered to find out if the things really had happened like this. Of course it was a fake!! Not only that. The girl rushed to the storyteller. „It was for the first time I could see a girl punching a boy, yelping ‘You’re not worth being looked at!!’” Jaromir closed the story.

This story illustrates statistics which Jaromir shows to the students: in real life people get their first sexual experience in their eighteens. And how many couples that start dating in their fifteenth really endure? Only negligible percentages of them. A present teacher joined the conversation. „After 45 years teaching I know only 2 couples who finally stayed together.”

You can watch a short video from the lecture and see how Jaromír naturally communicates with children.