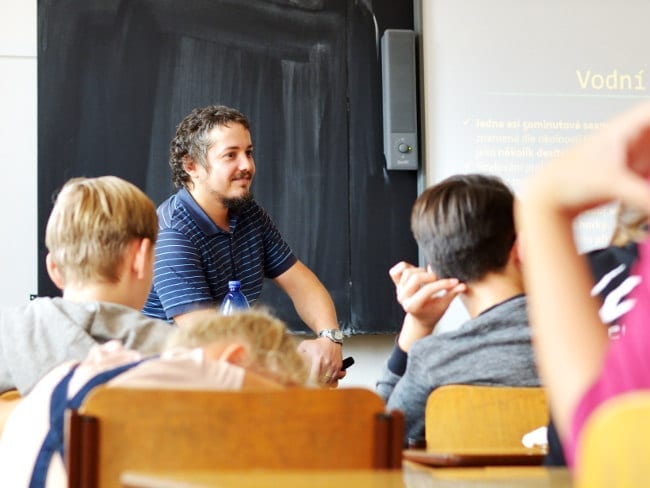 In September, Simon Velkoborsky started his fourth year of lecturing in Klatovy and its surroundings. We visited him at his lectures in two completely different worlds – in the first grade at a six-year grammar school (equivalent to the 8th grade of elementary school) and in a group of kids from the first grade of practical elementary school. The both lectures were focused on smoking issue.

In this topic, Simon discussed cigarettes and smoking with students from all sides – whether and how cigarettes harm, why people smoke, how much money they can drown in it, what cigarette smoke gets into the body and how difficult it is to quit smoking etc.

The lecture is ongoing more like a dialogue with students. For example, when they are asked: „Why kids in your age start smoking?“ they name boasting and a group of friends at the first place. Then the lecturer plays a short scene about this topic, about how he once started smoking in the eighth grade so the boys took him into the band. Though it did not help his popularity anyway… And he could not get rid of smoking for next seven years. Was the boasting worthy of it?

Funny moments occurred at the grammar school where a teacher of biology and chemistry was present at the lecture. The teacher entered the lecture at the beginning with a statement that he is a smoker. During the lecture he agreed with the lecturer though, confirmed, that it’s difficult to quit smoking, how harmful it is and he encouraged the students not to start smoking at the first place. 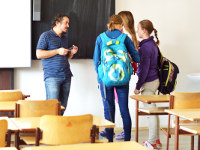 At one point Simon remarked that he quit smoking from day to day! When he mentioned that students asked him: „How can it happen?” Simon told the truth: in truth he could not quit but prayed to the God to be able to stop smoking. The day after that he found out, that he had no taste on the cigarette and it had never changed. „That’s how it was with me,
really!”

The lecture for kids from practical elementary school was held by the lecturer more as a discussion. He was talking with the kids about the basic topics of the lecture and accompanied them with simple drawings and a scene of cuddly toys. The kids were observing the lecturer with interest and enthusiasm and were joining the discussion actively. The present teachers appreciated that the lecturer tailored the program to children’s needs. One of the female teachers declared during a break halfway through the program:  „What a pity I have to go teach the next hour, I would like to hear the rest of the lecture. “ 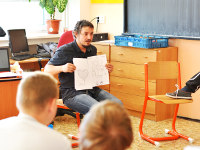 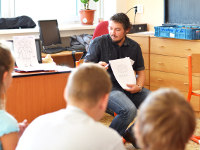 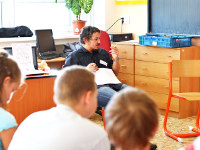 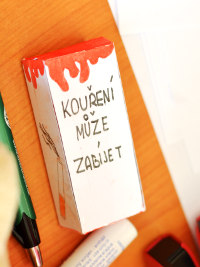 Another of the female teachers talked with the lecturer during the break and asked him about Christianity among other things. Therefore, I could listen with joy in my heart about how Simon tells about his testimony and shares the gospel. The teacher looked pleased and intrigued.

The lectures in two completely different classes took place in a friendly atmosphere and I believe that students thought duly about all the consequences, which smoking brings. They could also think with the lecturer about their own value, the desire to belong to a group and the fact that even if one is influenced by friends its always his own decision.

Relentless statistics says only 1-3% of smokers are able to quit smoking. It is a strong message for kids that its worth not to start smoking at all.