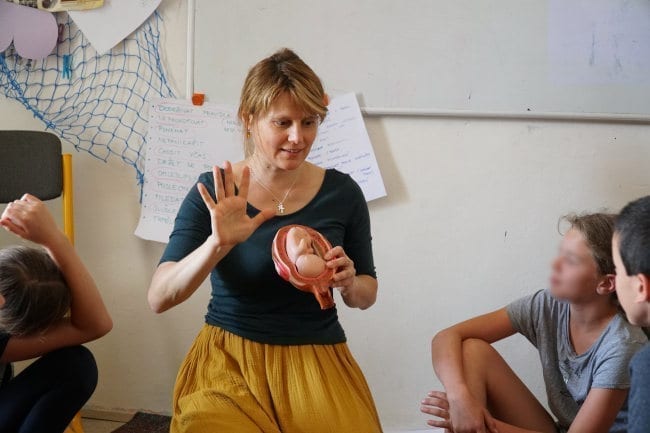 How did I come into the world? Where did I come from? How did I get there?
5th grade students in a small town had already had some knowledge of the world, human body and its biological processes, when we visited Jana in her programme for schools there. Her lecture was called “How I came into the world?” This time Jana gave the children a possibility to see this topic in a new, complete and lovely way.
First, it was simple. Jana called things what they really were and at the same time she did it with high respect for children’s perception and intimacy itself. Her program included all important facts – from the moment of conception to the development of a tiny baby in the womb and her separation from the mother’s body during the childbirth.
It was also a big fun for everyone. Students watched the sperm race for the first place as only the first one won. At other times, it was mysteriously exciting to watch a visualization of an egg closing its cover immediately after the fertilization, which meant no more access for other sperms. Students felt free to participate with asking questions and sharing their life and family experiences.

During the program the students could take a guess: When does human life actually begin? According to their opinions they divided into groups. By means of discussion they tried to convince the members of other groups to move to them. And it was sometimes successful!
The program demonstrated the miracle of being human as male and female, partnership and a beginning of a new life in a wonderful and very respectful way. It was a ray of light in the world where intimacy became a matter of trade and great confusion.
Jana impersonated someone living and breathing a healthy view of the world. There was much room for children to express their feelings or opinions in the programme. Jana’s kind approach filled the whole lecture with a pleasant atmosphere and a mother like approach.
Together with Jitka Kultova Jana is another person who had elaborated unique school program focused on life. Jana and Jitka also share their skills to other lecturers. This way the message of respect for life spreads beyond the Plzen region and reaches more and more students.